DUNEDRIFTER,
Book #2 in Wheatley’s novella series WARLORDS OF THE SANDSEA. 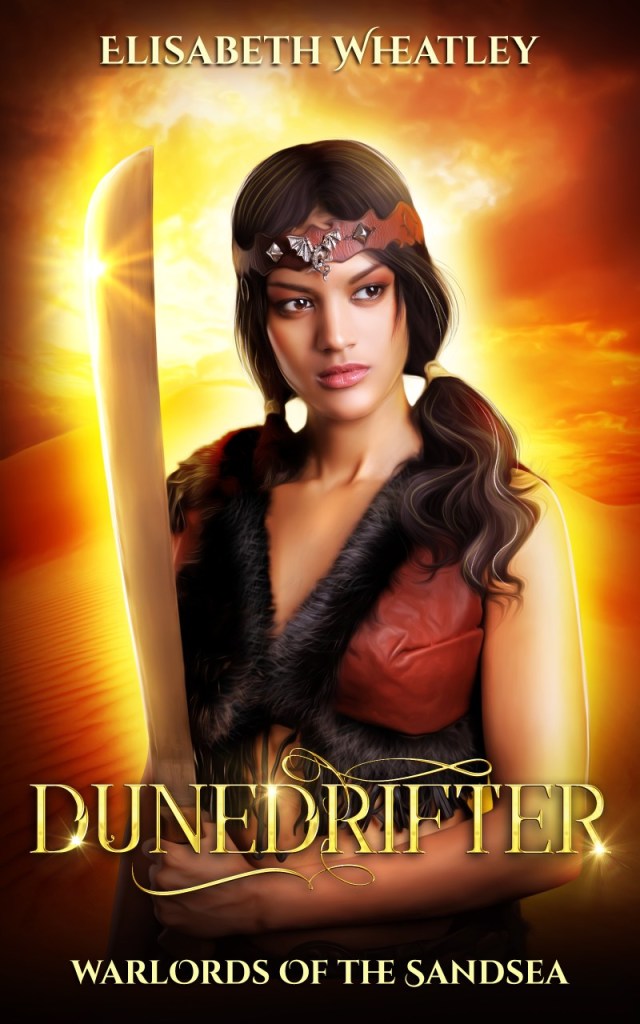 A warlord owes loyalty to no one, not even those most loyal to her.

Ensaadi Talitha has always been able to trust Gilsazi, her most faithful general. But when Gilsazi is captured and held for ransom, her grandfather forbids her taking the army to rescue him. Her only choice is to seek out Ashek, the unforgettable Dunedrifter who saved her life more than a year ago.

Ashek is willing to help, but demands a steep price. As it becomes clear there is more to Gilsazi’s abduction than a band of simple bandits, the threads of Talitha’s obligations and duties become ever more tangled.

Only the cruel can survive in the brutal world of the Sandsea. And a heart is the one luxury an ensaadi can’t afford.

Dunedrifter is a 30,000 word story and second in the Warlords of the Sandsea romance adventure series

Feels. So many feels. That’s how we’re supposed to express ourselves now, right?

While I love a strong male character (like a lot, okay?), I’ve really enjoyed reading Wheatley’s take on a powerful female heroine in this new series of hers. I don’t know of many other authors that quite get it done like how this author has done it! Talitha (the MC) is physically a force to be reckoned with. I imagine her much like the CrossFit women we see in Wonder Woman that were hired because of their very strong build. And I really favor that look over any other on a woman. It is my dream to look strong like that one day.

Now, I also love a good logical story. What does that mean, Kaitlyn? It means the main character here is not your average woman. On average, a woman cannot physically take everything Talitha has been through–which is, like, pretty much being dragged to hell and back–but that’s on average, of course! Wheatley knows this very well and is careful not to write unrealistic females at every turn.

I very much enjoyed getting to know the characters further in the second installment of WARLORDS OF THE SANDSEA. I would occasionally become irritated at situations involving the characters and their own frustrations. I laughed with them, cried with them, peed with them–I mean what? (Ohhh yes, Wheatley does not forget that characters in stories also have to relieve themselves. I enjoyed this aspect of her writing just simply because I felt it added a more realistic charm to it. Why don’t more authors address the bathroom, even if for half a sentence? Or am I reading the wrong books? )

The world-building of the Sandsea is a careful balance. It isn’t an information-dump, but at the same time, you feel immersed in a completely new world. Water is more valuable than anything, which begs readers to be grateful for the cup of water you currently sip on.

The only reason I didn’t give this novella 5/5 stars is because of several grammar mistakes as well as an inconsistency with the relationship of one of the characters. (Is Esreth her cousin or sister? I’m confused…?) I feel like perhaps one or two more read-throughs would have solved these simple errors.

All in all, an amazing tale! I’m looking forward to continuing ASAP!

Download DUNEDRIFTER for your Kindle now! If you haven’t read the first installment, make sure to start with that one: ENSAADI!

Elisabeth Wheatley began what would be her first novel at eleven and hasn’t stopped writing since. When she’s not daydreaming of elves, vampires, and/or princes in need of rescuing, she can be found wasting time on the internet, fangirling over her latest obsession, and pretending to be a functional citizen.

Heart of Gold (Book 4: The Forgotten Countrymen) // STATUS: with Editor